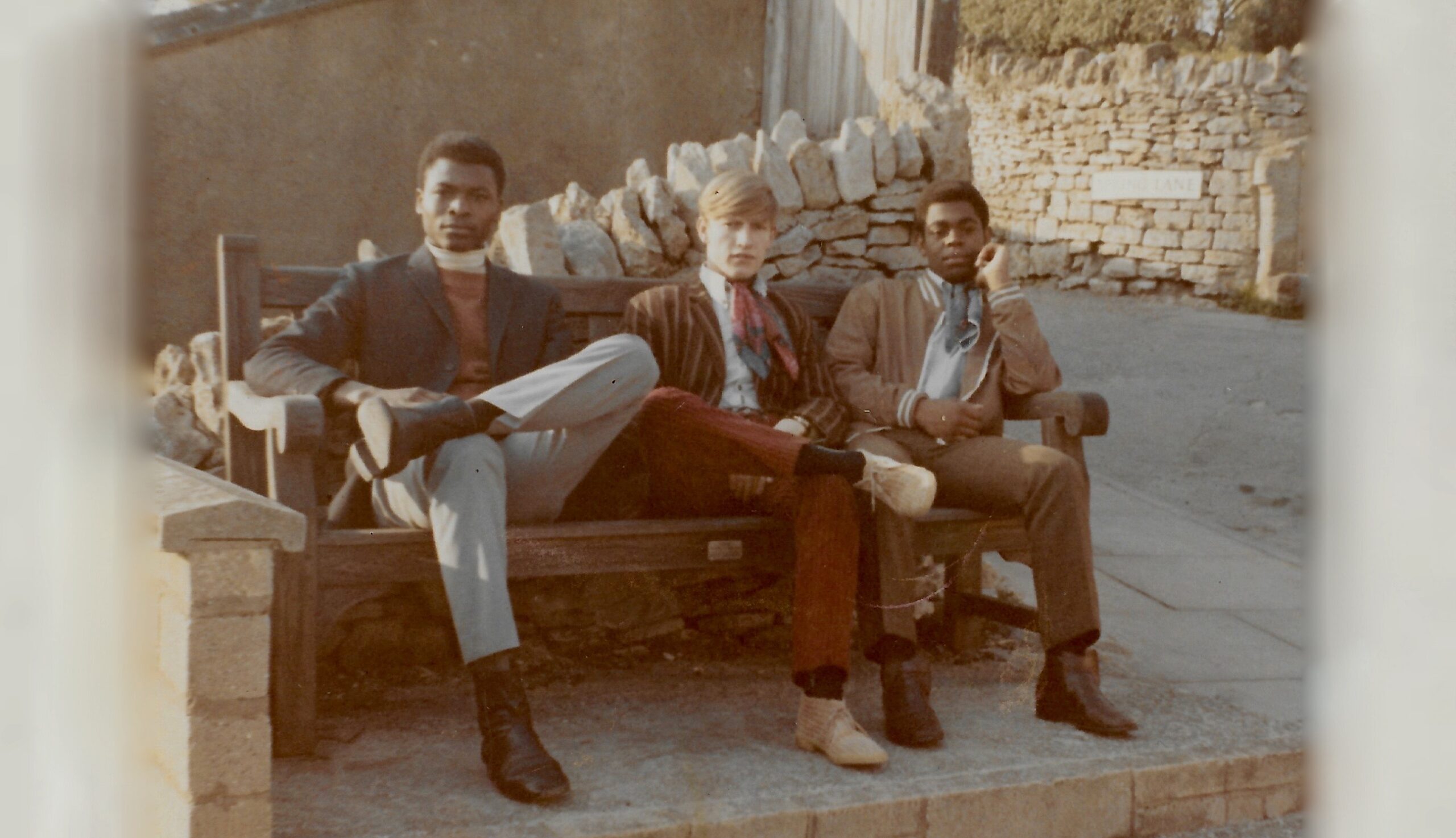 Three Young Men on a Bench

Dan Guthrie has only been amidst the creative industry for about nine months, yet he’s already made his second short film, ‘Three Young Men on a Bench’. Whilst it was done on a much lower budget than his previous foray into filmmaking – the Random Acts supported Seven Stages – it’s still a bold expression of creativity, exploring rural black masculinities through a modern reinterpretation of an old family photo. In this article Dan further explains the inspirations behind ‘Three Young Men on a Bench’. Watch the film below.

I came across the inspiration for this film while rifling through a box of old photos. In my spare time, I run the Instagram page @blackindaburbs, a digital archive of photos of my mum and her family living their “best black lives” in seventies rural Britain. Both me and my mother’s family grew up in Stroud, a large town nestled in the heart of Gloucestershire with a 97.2% white population. That might seem like a bit of an unusual place to bring up a black family, but there was logic behind the move.

When my grandfather, Bill, made the decision to start afresh and move to the UK in the sixties, he knew that he wasn’t going to do it without having a garden. Back in Black River, Jamaica he was surrounded by lush greenery and lived off the land, hence coming over here, he needed to have the space to grow his own vegetables like he could back home, and that’s why the family decided to move to hilly Stroud.

While I was looking for pictures to upload to the @blackindaburbs account, I found the above photo, taken back in 1968. It’s a picture of my uncle Curtis (far right), his cousin Raphael and their mate, Brian. The three of them are kitted out in their Sunday best on a hot August day, sat on a bench about a five minute walk away from the house that I’ve lived in for most of my life. In my eyes, it’s truly the perfect picture. Three young men on a bench, teetering on the cusp of adulthood, radiating masculinity like the primary colours and forever frozen in a photograph. Pinstriped blazers, paisley cravats and Clarks’ desert boots; if you didn’t know the picture was fifty years old, it could easily be a backstage photo from a Wales Bonner runway show. One could be forgiven for thinking the photo was taken on a high-end camera with the aid of lighting assistants and make-up artists, yet the likelihood is that it was snapped up on a disposable camera without a moment’s thought and later developed at the local chemist.

“Photographs were an important part of the immigrant experience.”

Not everyone could afford to come over to the UK from the Caribbean back in the day. Those who managed to make the journey over to the UK often had to provide for and send money to those back home. Accompanying the fortnightly dispatches of crisp pound notes were photographs, showing off how great life was over here, and since film wasn’t (and still isn’t) cheap, every photo had to be just right – no crooked shirts or hairs out of place! Thus when I saw the photo of my uncle, I knew I had to do something with it.

I could’ve just written about it or put it on Instagram but I felt like it deserved something more than that. I knew that any attempt at a live action recreation wouldn’t do it justice, so instead I decided on a reinterpretation. I dissected the photo into its several components – the place, the people and the clothes they were wearing – and set out to capture something to represent each of them. With that in mind, I grabbed a bag of vintage shirts from my wardrobe, called up my mate, Marie, and headed out onto Coaley Peak, a local viewpoint that looks out over the Stroud area. 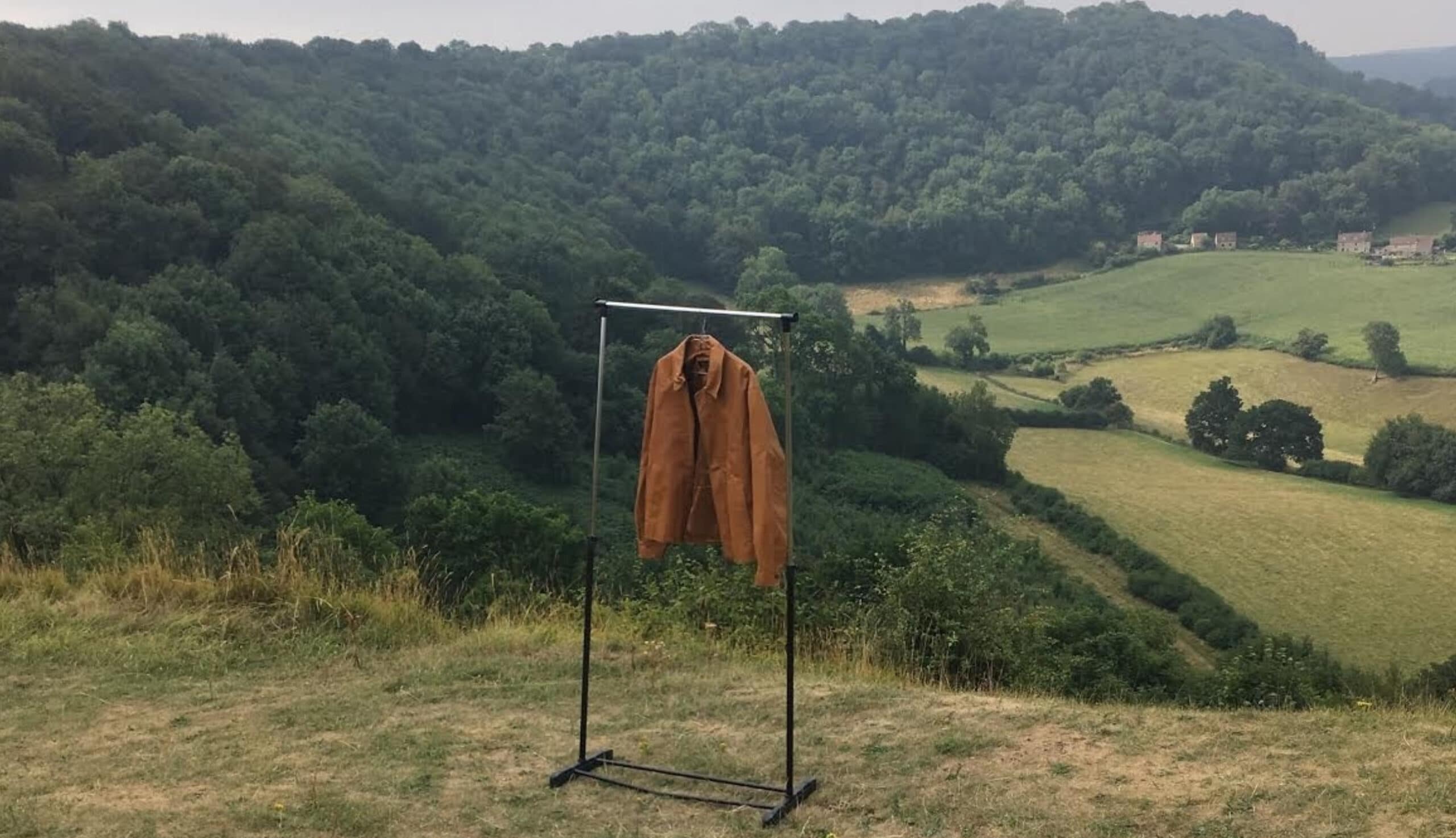 We decided to shoot the clothes dangling in the wind on the highest point of the hill, to let the surrounding nature bring life and character into the folds of the fabrics. The bench you see in the film is the exact same bench as in the original photo, albeit a bit worse for wear with a few slats missing and a couple of empty gin bottles stashed underneath it. There wasn’t really much else we could do to improve the shot apart from lining the shot up and letting the camera run, so that’s what we did. The biggest influence on the look and feel of the final cut was probably a playlist of R&B interludes I had on in the background. Tracks like Frank Ocean’s “Good Guy”, Kelela’s “Bluff” or Blood Orange’s “With Him” may have relatively short runtimes, but feel more like precisely crafted songs than rough studio sketches, and I tried to channel those short but perfectly formed bursts of creativity into the edit.

The voice you hear in the film is that of my uncle Nigel, the brother of Curtis and the man who took the original photo, speaking over the sound of the birds outside my window. I caught him on the phone off the back of a nightshift one morning and got him talking about the responsibilities he had growing up as a young man whilst representing the black community. Despite the fifty-year age gap between us and our two very different lives (he was a Jamaican immigrant and I’m a British national), much of what he says about looking your best still rings true for me. And the thing that unites us both, apart from shared genetics, is that we were both boys of colour coming of age in the same white town.

Yeah, there may have been some bad times along the way but overall, growing up in Stroud has been a pretty good experience and I wouldn’t have it any other way. ‘Three Young Men on a Bench’ is a portrait of rural black masculinity, a love letter to the country roads that raised me and an ode to the clothes that I wore along the way.