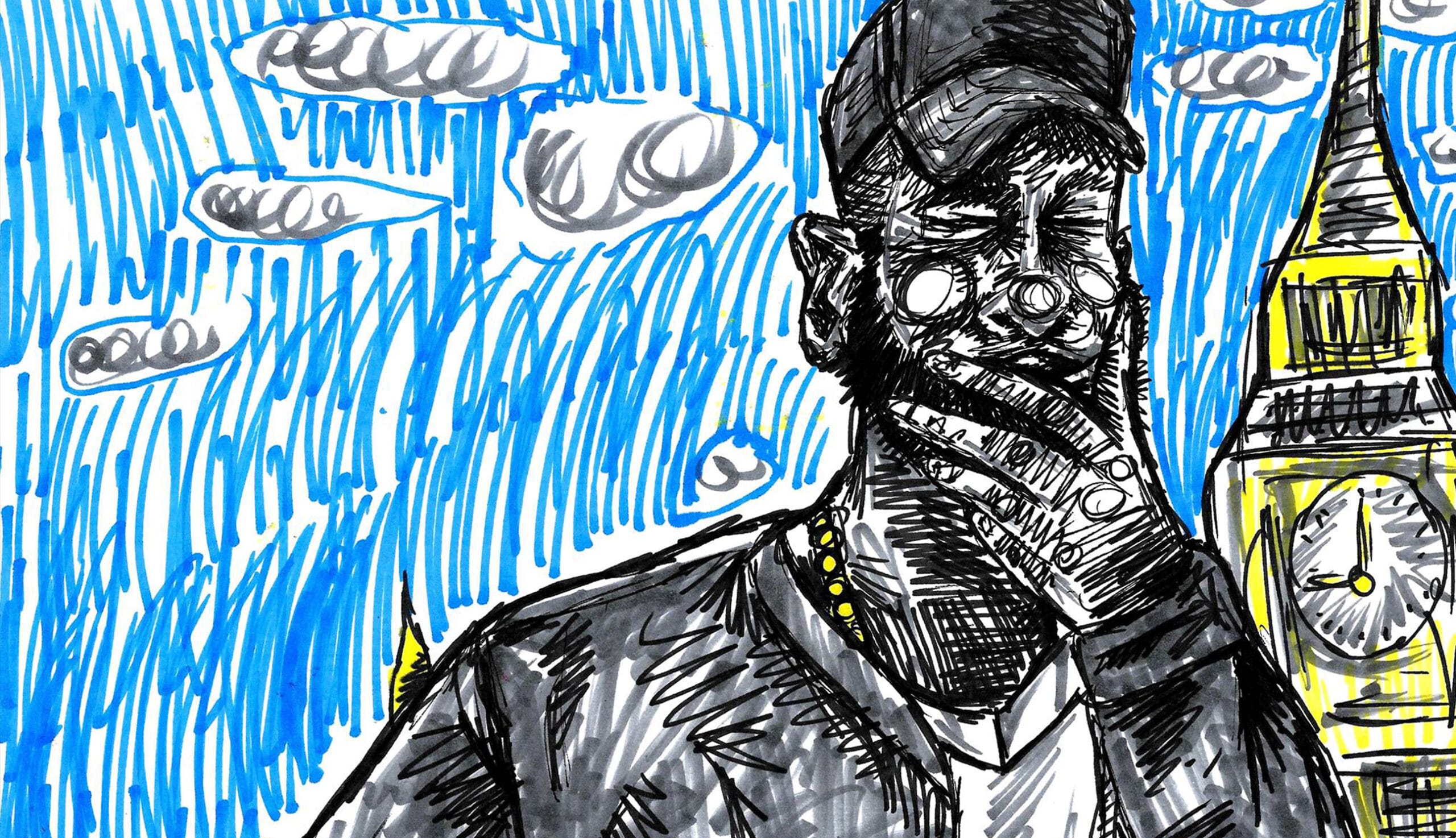 At his recent NTS show at the Crofters Rights in Bristol, we caught up with talented up and coming emcee, Kojey Radical, to explore the inspirations behind his amazing work. Read the interview below.

When did you discover Mansa Musa?

WorldStarHipHop. In one of the black history months they posted a video about him and I was like – what the hell is this? So then me being geeky as fuck, went and researched it to death. It’s such a prominent part of history in terms of accolades belonging to an African nation and it’s not discussed.

Why’s he important to you?

In terms of the dialogue of our history, it’s so unfortunate that the starting point feels like it became notable when slavery began. What’s crazy is that the option to study pre-colonial Africa has always been there, but people have to want to be interested. If you’re in the Western world and you start feeling distant from where you’ve understood to be home because you understand that it’s not your origin, you’re gonna wanna learn a little bit more about your true origin. You’re gonna find these gems like Mansa Musa. People just gotta see that the knowledge is empowering and not just boring bits of fact.

I am my team. As I’m making a song, I have a vision of some sort and luckily I’ve got people around me who are geniuses. For us, there’s no idea that isn’t a good one. How we show things is way more important than the idea sometimes. Sometimes we take a very simple concept and choose to concentrate on a very minor detail for an extended period of time.

Why do you wear ‘black-face’ in some of your videos?

I was a painter/artist before I was doing anything to do with music. I painted a series based on one of Jean-Michel Basquiat’s pieces, Irony of the Negro Policeman. At the time Obama had just been elected so I wanted to do a response piece. I created a piece of artwork called ‘Irony of a Negro Leader’ and painted a golliwog version of Obama. There was something about the image of a leader in black-face that intrigued me. Then I did an editorial shoot based around that concept after a conversation with my barber. He had mentioned something about race that had altered my perception a little bit so I went back and reconsidered my references. I started looking at Grace Jones a little bit more. I think that’s where the kind of androgynous side of it came from. I started taking concepts that were a little bit different and bounced them off the mandem. If the mandem are grossed out, scared or bewildered by an idea, then it’s probably a good one.

Where did the inspiration for Bambu come from?

So that’s kinda everything I just explained. Bambu was the inception of that. The video was raw because of everything everybody was going through at the time. I think what you’re witnessing there is five or six kids just finding solace in art; finding a way to escape through some ideas and then doing it. We did it for less than £100. We didn’t need money or anything like that. So the whole first verse is in some ways a recount of my time at college. We used to talk about other artists and I remember sitting there and saying “why are we talking about them? I can be that person instead of talking about them”. We would spend all of our time getting high and listening to hip-hop and my boy Martin would always come with all these exotic rolling papers. There was a Biggie line where he talks about smoking bamboo in Juicy and then I realised bamboo was rolling papers. ‘Be Aware Media Blinds Us’ is the acronym for BAMBU. It came from Rizla papers.

What do you mean by ‘any effort to engage your conscience must be seen as conscious’?

If I try for a second to write a deeper bar or explore a topic a little bit further than surface value, I’m called a conscious rapper even though I might not be. You guys don’t know me. I might be the most abusive person in the world to the planet, to women, to my family; I could be a horrible person. Just because I spat one deep lyric it doesn’t make me conscious as a person. You can’t assume that from anyone’s lyrics. So any effort to label someone ignores them as a person and their intentions.

Who are your biggest musical inspirations outside of hip-hop?

I’m a big fan of Jamie T. My love for Jamie T was so genuine. As a kid, I didn’t really care about genres that much. I could say that I grew up on hip-hop but hip-hop’s almost like a relative. It’s like growing up getting to know your brother; you have to because you guys share the same house. But then you might hang out with the kid down the street and that’s your friend. Jamie T was my friend. You can’t limit yourself to one genre. Sound is everywhere. What you gonna do, block your ears for the rest of your life?

What weird things inspire you?

I didn’t know they existed.

How do you deal with writer’s block?

I’m really self-destructive so if I get writer’s block I try and do something that either makes me really angry or really sad. And then I write.

Has depression ever influenced your music?

I’m not trying to make believe in my music. I might gloss over the tone but the majority of the time I’m actually talking about emotions or life experiences that are closely related to darker times. They might be over happier beats but the inspiration still comes from those darker places. It’s impossible not to take from those places because they’re so real. It’s like when you’re deep into an emotion and you hear a song that you like at the right time. It anchors itself to you. It embeds itself. It becomes one with you.

Is art an important way of expressing suppressed emotion?

I feel like it’s inside everyone. People need to find what it is that gives them a voice because there’s so much that tells you to be quiet in life. Everywhere you go, everything you do and every system that you enter into is designed to tell you to shut your mouth. And we listen until we find a voice. Your voice could be football, your voice could be music, your voice could be writing, your voice could be cooking. Find something that enables you to speak a little bit louder than everyone else. And continue, just as life continues. You wake up every day and go to sleep every night; it’s a cycle. During those in-between moments find something that makes you feel happy, even if just for a couple of hours a day. We rush back to those moments. Those moments are what make us confident and then once people realise that we all have our own voices, we can use them to impact certain things. Using your voice isn’t all about jumping on Twitter and blasting your fingers off in 140 characters. Using your voice is understanding what your skill is and utilising it for benefit; maybe of yourself, maybe of the world. Some people are selfish, some people are selfless. I can’t tell those people what to be.

Do you think masculinity and femininity are social constructs?

Don’t get me wrong, I’m a firm believer in equality but I also believe we’re not the same. There’s things women can do that men can’t do and vice versa. That’s biological fact so there are gonna be biological traits that come with both, i.e. hormone levels, cycles etc. Masculinity and femininity as social constructs are a little bit more mythical because everybody is individual and it’s up to the person to decide who or what they want to be in life. There is no one set of rules that can tell you if you’re a female, you must be a ‘girly girl’. It’s the same way that there is no one set of rules that can say homosexuality is wrong. The constructs are what people are taught and slowly but surely you can deconstruct those things by just opening conversation up.

Would you be fazed if someone labelled you feminine?

I don’t give a fuck. At the end of the day, who actually cares if I’m gay or straight? If I’ve never moved to you, you have nothing to worry about. Chances are if you’re a girl and I’ve moved to you, you have something to worry about. All the speculation in between is pointless. Girls liked me more when I dressed in a way some might consider feminine. If I’m not harming you then there’s no problem, I’ll continue to live my life.

When did you stop caring about the opinion of others?

Year 11. I bought my first pair of skinny jeans then and shaved my hair into a Mohican because Wretch 32 dropped a cool video. I had been dancing for about eight years at that point and won championships and all that kinda stuff. I was just starting to understand the idea of liking a girl. I had my first girlfriend. I remember coming back in skinny jeans one time and she was so gassed. It’s gonna sound weird but the idea of knowing how to dress myself was more attractive, so at that point I realised that people enjoy personal style so I thought I’d make my own. I used to act as well so the idea of adopting a role for a particular moment doesn’t bother me. For example, most of the clothes that I was wearing in Bambu were women’s clothes but who cares? Because I’ll go right back to the endz and the mandem will ask me where those clothes in the video are from and I’ll be like, ‘it’s a woman’s blouse’. Then they’ll be like ‘man can’t wear those things’ – Wait, a minute ago you loved it though so what changed? I like challenging perceptions to the point where conversations like that become a little bit more normal.

Lastly, what advice do you have for aspiring poets?

Have thick skin. Write what you feel. Write often. Don’t imitate. Find your own voice as I said before. Take yourself out of your comfort zone. Poetry shows are nice but it’s a breeding ground for the same kinda shit. Realise that performing isn’t for everyone and your skills might be more so with writing. Explore it as much as possible. Know that not everyone’s gonna care. Not everyone cares about poetry so not everyone’s gonna get the deepness or intellectual connectivity that you’ve applied to a sentence. Some people just want the sentence. Write to cater to all but most of all cater to yourself.