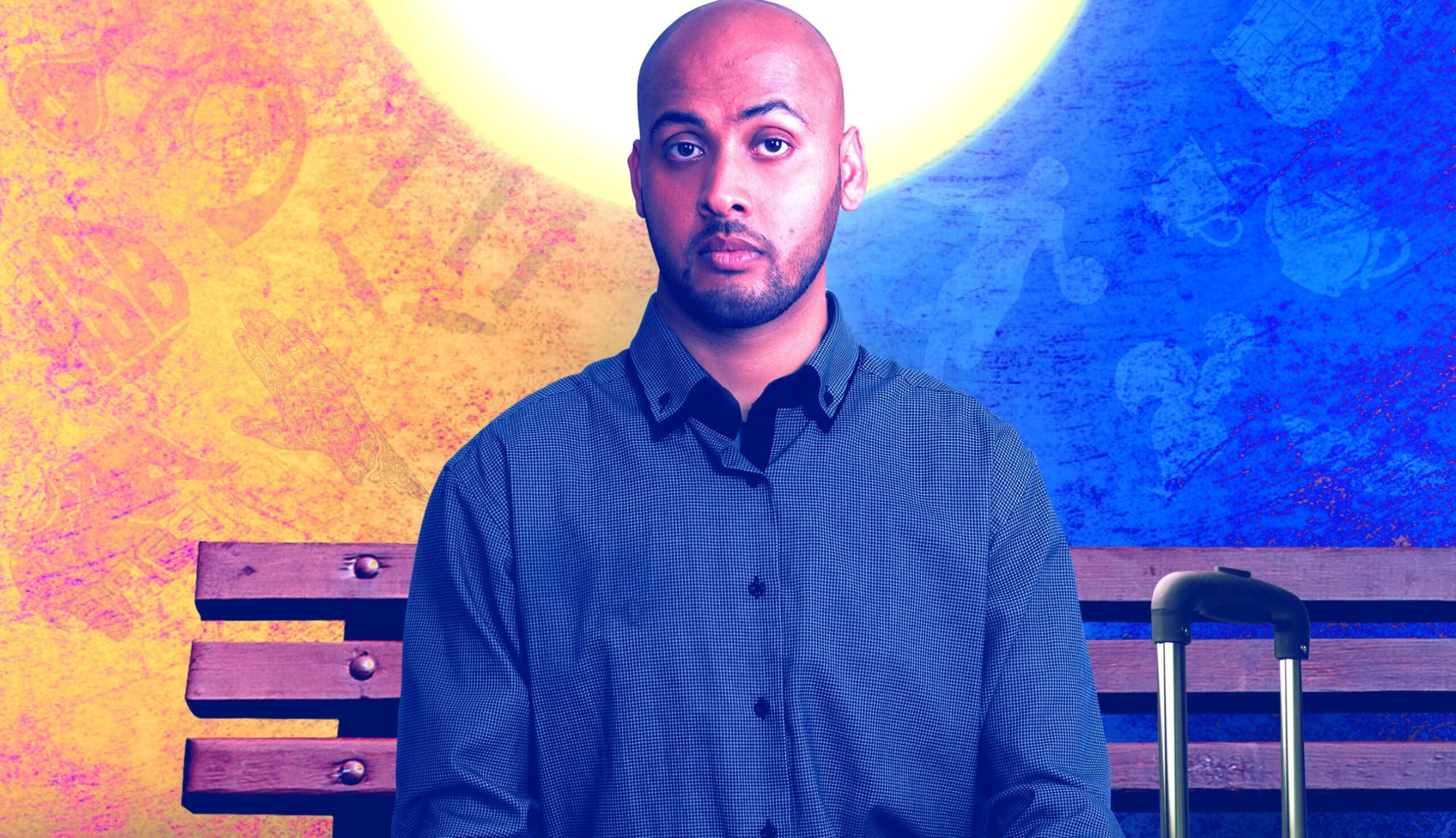 An Indian Abroad: a student’s journey of self-discovery in Brexit Britain

Hari Ramakrishnan AKA Pariah Khan is a writer, performer and filmmaker. In 2016, he was named one of Bristol’s most influential young people for his work in theatre and comedy. Hari has also been selected by BBC Three and The Latimer Group as one of the UK’s top 50 creative young people. He brings his one man show, ‘An Indian Abroad’, to the Wardrobe Theatre 27-29 June. The show explores race, culture and identity in contemporary Britain for the South Asian diaspora. Read our interview with Hari below.

Tell us a little bit about ‘An Indian Abroad’.

An Indian Abroad is a one-man theatre production following Krishnan, a young Indian student on a journey of self-discovery, who decides to take a gap year to exotic Britain to ‘find himself’. The story is an exploration of race, culture and identity from a British Asian and Indian perspective. I’m the writer and performer. It’s directed by Manga Theatre’s Eduardo Gama and was supported by Arts Council England, Rising Arts Agency, Creative Youth Network and Arnolfini Arts. We’ve toured across the UK and sold out shows in Bristol, Birmingham, London and Oxford.

Is the character you play based on a real life person?

The show is heavily autobiographical, but with some creative licence. You might be surprised which parts were based on real events and which weren’t.

How has Brexit affected the script for ‘An Indian Abroad’?

Brexit hasn’t affected the script, but it has affected my drive to push the show to as many venues and in front of as many audiences as possible. I think its exploration of race, culture and identity in contemporary Britain is an important topic, but even more relevant now in these hostile and confusing times. It’s made me more keen to perform the show in cities with large South Asian populations as it’s important for us to be seen and owning our own narrative. The show won’t give you any answers, but hopefully it prompts you to ask more questions.

By inverting the “gap yah” stereotype on its head, I have a high concept idea which is easy to pitch and grasp, with the aim of doing so to expose the ludicrousness of ‘finding enlightenment’ in another country. However, alongside that, it was important for me to use this as an opportunity to depict authentic Indian and British Indian experiences i.e. the duality of a young woman projecting a faithful and traditional facade to her family while going out and being a regular teenager getting in trouble with friends, an exploration of why young men project the ‘rude boy’ image, and exploring how elders in our community can be more traditional, socially conservative and damning of other immigrants. As someone who grew up in both India and Britain, I can see each culture from the inside and the outside and I think that lends to a unique depiction.

How have conflicting identities affected your own life?

I’ve been called Hari my entire life, but I found out when I was 8 years old that I have a different first name. I now go by the pseudonym Pariah Khan, which my mum chastises because it sounds too Muslim. I was born in Libya, then moved between India and England. It’s all given me a great point of view as a writer and comedian, but it means I sometimes feel isolated or unsure of where I belong. That being said, I think it’s important to own that experience and there are several people out there with displaced identities, whether they’re biracial, moved around a lot or something else.

What are the main challenges of performing a one-man play?

It can be very lonely. My happiest times in theatre have been as part of a cast, joking around, spending all day with each other around rehearsals. I don’t have that luxury with this show, which has helped me develop a more professional approach to my practice, but the solitary aspect is a downer.

What do you enjoy about it the most?

There are a few wicked subversions in the show that I’m very proud of, it always makes me smile when I feel them working in front of a new audience.

Who are your biggest inspirations?

I’m a huge fan of Raleigh Ritchie, Donald Glover and Chris Jericho. They’re the best in the world at what they do, and that doesn’t only encompass one field. My stand-up influences are Chris Rock and Dave Chappelle and my filmmaking influences are Charlie Kaufman, Christopher Nolan and Al Pacino. I’m also a massive fan of The Rock!

What do you enjoy more filmmaking or theatre?

While making a play, I’d say filmmaking but when I’m making a film I’d probably say theatre. The live response from theatre is incomparable, but so is the thrill of creating a film.

I wanted to make a satire of middle-class people moaning about the graduate experience, and after a chance conversation with someone at a writing workshop in London, I found my hook. Slice is a dark satire of the graduate experience following a young woman (Marose) who is stuck in a saccharine work environment and fed up of the hyper-feminine behaviour expected of her. Her parents encourage her to find joy elsewhere, but what makes Marose happy comes at a cost to her customers.

Another source of inspiration came when I saw a lot of BAME Random Acts filmmakers choose to make their first film about race, ethnicity or identity, and although there were some great films, I didn’t want to do that. I thought it would be funny if a BAME filmmaker made the whitest film ever, so I did.

Why is it important to you to maintain a multi-disciplined approach to the creative industry?

If you’re too entrapped in your own bubble, you can lose the ability to innovate. I feel some of my best work benefits from the experiences and influences I’ve had from somewhere completely different. My live performance skills have become incredibly versatile thanks to my experience in theatre, wrestling and stand-up.

That was an important part of the making of An Indian Abroad; it blends the positives of both stand-up and theatre (the raw, honest nature of stand-up with the precision and subtlety of theatre). It makes theatre less stuffy and stand-up less rough around the edges.

Lastly, what’s your advice for other young creatives interested in a multi-disciplined approach to the industry?

We’re in an age of polymaths – look at Jacob Anderson and Donald Glover. If you put the time and dedication in, there’s no reason you can’t be talented at multiple things, but make sure you keep stressing that. Companies or advertising companies might find it easier to pigeon-hole you to sell a particular product or project, so to make up for that you need to claim your own narrative and push it out into the world.