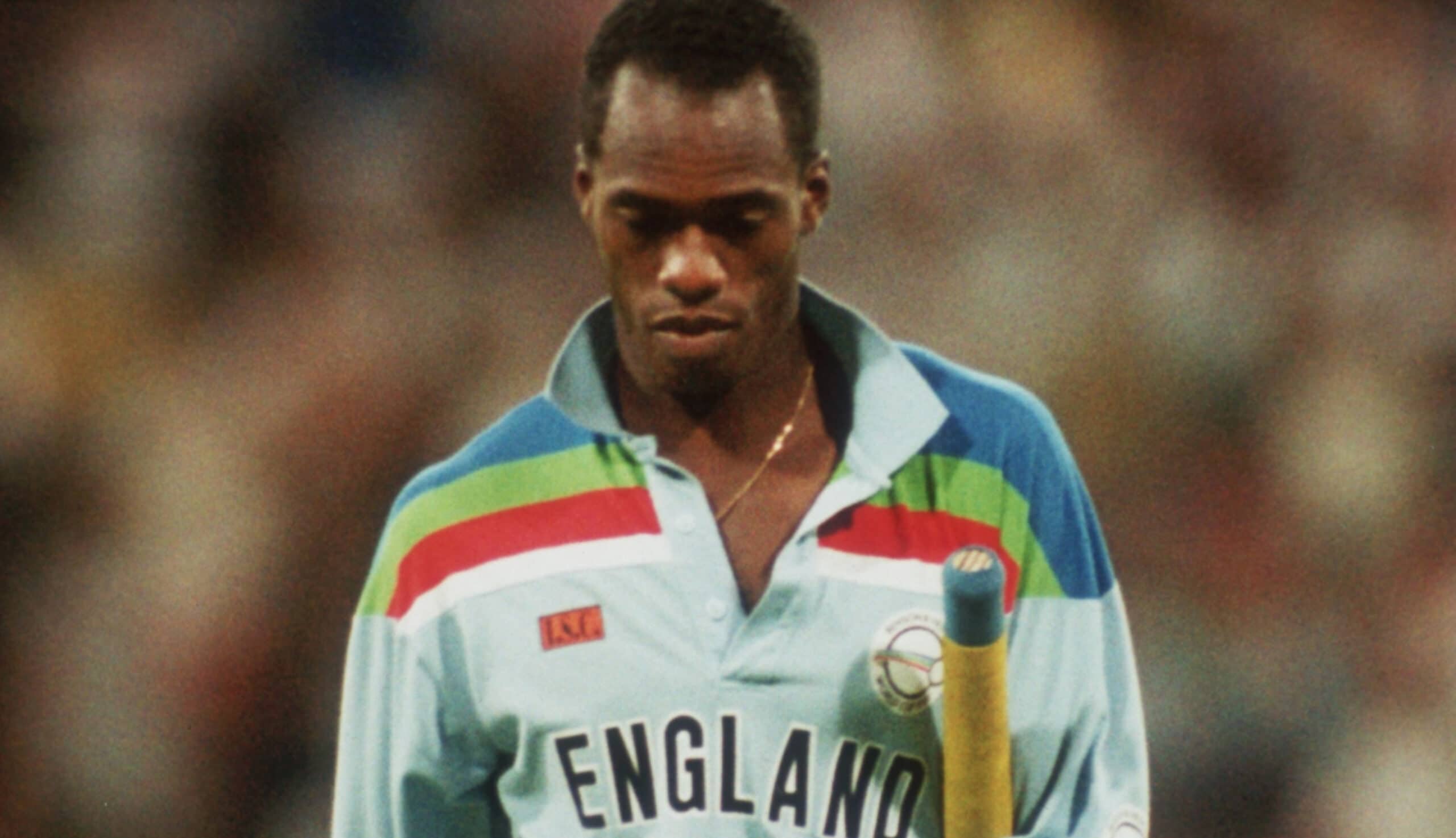 ‘The Long Walk Back’ is a new theatrical play about former cricketer, Chris Lewis, and the mental struggle he endured after being imprisoned for trying to smuggle cocaine into the UK. The two-man play stars Martin Edwards and Scott Bayliss. We caught up with Scott about his exciting new role last week. Read the interview below.

Tell us a little bit about The Long Walk Back.

The Long Walk Back is a play about former cricketer, Chris Lewis. We’re touring throughout the whole of April. So back in 2008 Chris tried to smuggle cocaine from St Lucia to England and got caught. He was a big cricketer back in the 90s. The play is about the story of him getting caught, being in jail and how that affected his mind state. I don’t want to give away too much – but there’s a lot in there about the mind-set of being in prison, particularly after having been a famous cricket star. It’s all about the mental journey.

Which character do you play?

Martin Edwards plays Chris, and I play his jail mate. But there’s also an element of multi-role playing throughout the piece. It’s not so much a costume change challenge, but more about how I change my physicality and my voice to help the audience see me as different characters.

How did you get involved with the play?

A couple of people sent me the audition opportunity and I thought ‘wow, this looks good.’ They wanted two black actors and the audition was held in Bristol – I was pleasantly surprised that this was happening in Bristol because you don’t see it too often, especially as a two-man touring play, which is incredible in itself. So I went to the audition and to my surprise, a lot of the actors there were from London. I was one of the only ones actually from Bristol, so I had to represent! The audition was great, and then I got the call back shortly after.

How are the rehearsals going?

It’s going good. I was very nervous to start with. It’s probably the biggest thing I’ve done so far. Plus, it’s a story about a real person and Chris is actually gonna come and watch the play! And after each performance Chris is doing a Q&A with the audience. On top of that, it’s only a two-person play and it’s an hour long… so that’s a lot of lines to learn. They didn’t want us to learn the script before we started rehearsals and rehearsals are only 3 weeks, so it’s a bit intense! It helps the directors to have the rehearsals first so that they can decide which parts of the script work and which bits don’t etc.

Martin’s great as well – I didn’t tell him this at the time but I knew he was the strongest actor at the audition. He’s a cool guy, we work well together. Shane and Moira, the directors of the piece, are great too. At this stage it’s just about exploring the characters to see what comes out best because experimenting and playing with the characters is how the exciting moments in theatre happen.

What is the most challenging thing about theatre acting?

Probably the process we’re in now. When you’re in rehearsals and at the half-way point where you’re still learning the script, working on transitions and action points, and the context behind the lines, it can get complicated. It’s hard to do all of that while rehearsing. You’d maybe think the first show is the hardest, but for me it’s definitely the rehearsals.

Like sports stars say, it’s all about the training; the training has to be as intense as the match. You have to go all out in the rehearsals, using all your effort. You should finish rehearsals feeling mentally and physically tired. That’s how I’ve been feeling, I can’t even go to the gym afterwards!

How does it compare to acting for screen?

With film it’s still hard, but there’s less physical strain. It’s still very difficult because you have to make the acting ‘smaller’ but you also have to be careful not to do it too consciously. One of my teachers told me that it’s not about making it smaller, it’s about making it real – whereas in theatre there is more room to make a performance more expansive. With acting in general you’ve gotta make it feel real, but there’s probably slightly more pressure to do that on camera. There’s difficulties with both but I think theatre is harder. In film you may have to go to a cold location every now and again, but to me, that’s not worse than having to do a theatre chase scene over and over, while trying to remember your lines and beats. We did that the other day and it felt like I’d just run a marathon!

How long have you been acting, and did you always know acting was the dream?

From primary school I was doing productions here and there. Then I did GCSE drama and enjoyed it. Then I went to college to do a BTEC in acting, but throughout all that time you just wanna meet girls and go out for drinks and stuff like a normal college kid. Then I did a degree in acting at the Tobacco Factory higher education scheme and from there, I realised acting was what I wanted to do and started taking it more seriously. There may have been times where I’ve slowed down and focussed on the modelling a bit more, but even at that time I was still attending Identity drama school.

So I’ve always kinda known I’ve wanted to do acting. Even when my mum bumps into old friends who knew me from primary school and she tells them I’m doing acting, they all say they knew I’d get into acting. It was difficult when I just finished school because a lot of my friends all went on to do things like construction, and they always questioned why I was doing acting. I think this is a big thing that young people need to do more – if you know what you wanna do, go for it, find your purpose, and don’t let your friends sway you elsewhere.

Who are your biggest inspirations?

My favourite actors are people like Will Smith, Leonardo DiCaprio and Denzel Washington. I’d cry if I met Will Smith! But the ones that inspire me a bit more are the UK actors like Idris Elba and Ashley Walters, and people like the Mandem on the Wall actors, because I can see their process a bit more. Obviously Will Smith is inspirational but I’ve always known him as being famous, but people like the actors in Mandem on the Wall didn’t start out famous and it’s been inspiring to see their journey to bigger things.

Also people like John Boyega going from things like My Murder and Attack the Block to Star Wars is amazing, and people probably underestimate the work he put in between the last two. Daniel Kaluuya is another one. He went from Skins, a local Bristol show, to Jordan Peele’s Get Out. The British actors are putting us on the map. It’s a great time to be from the UK working in the creative industry. It’s not just acting, the UK rap scene is blowing up too.

What are your personal ambitions?

Of course I wanna go as far as I can. But for me, it’s not about being famous or anything like that. I just want to be able to pay my bills with money from acting. It would be amazing if I could buy my house, my car and support my family and future kids from a career in acting. I just need to get a few TV credits under my belt now. When I’m not doing theatre, it’s great to do short films to keep my skills sharp. I’d like to do more creative writing myself too. It’s just about trying to keep busy.

How important is it to have a multi-faceted approach?

For sure it’s important. An education in your craft is important – not just from an institution. Thanks to the internet, you can educate yourself on the creative industries much more easily now. Creating your own platforms is also important.

What advice do you have for other young actors?

Try not to listen to the negatives and don’t always follow your friends; you can only be yourself. If you want something, go out and do it. Also, you never know who’s going to be your future employer so treasure every connection you make. Put out your own content – everyone knew I did acting but few people had actually seen me act until I did the SON Tribe stuff. Just try and do everything, especially when you’re young and you have that drive.

When and where can we see The Long Walk Back?

It starts on April 2nd and finishes on April 27th. We’re doing a few places but the big ones are The Wardrobe Theatre in Bristol on the 16th and 17th, we’re doing Bath on the 19th, and Greenwich Theatre in London 24th – 27th. We also have a few prison shows to try and give something back to the community. I’m excited for it all!

——
Find out more about ‘The Long Walk Back’ here. Follow Scott on Instagram and stay up to date with the big moves he’s making: @scottbayliss_