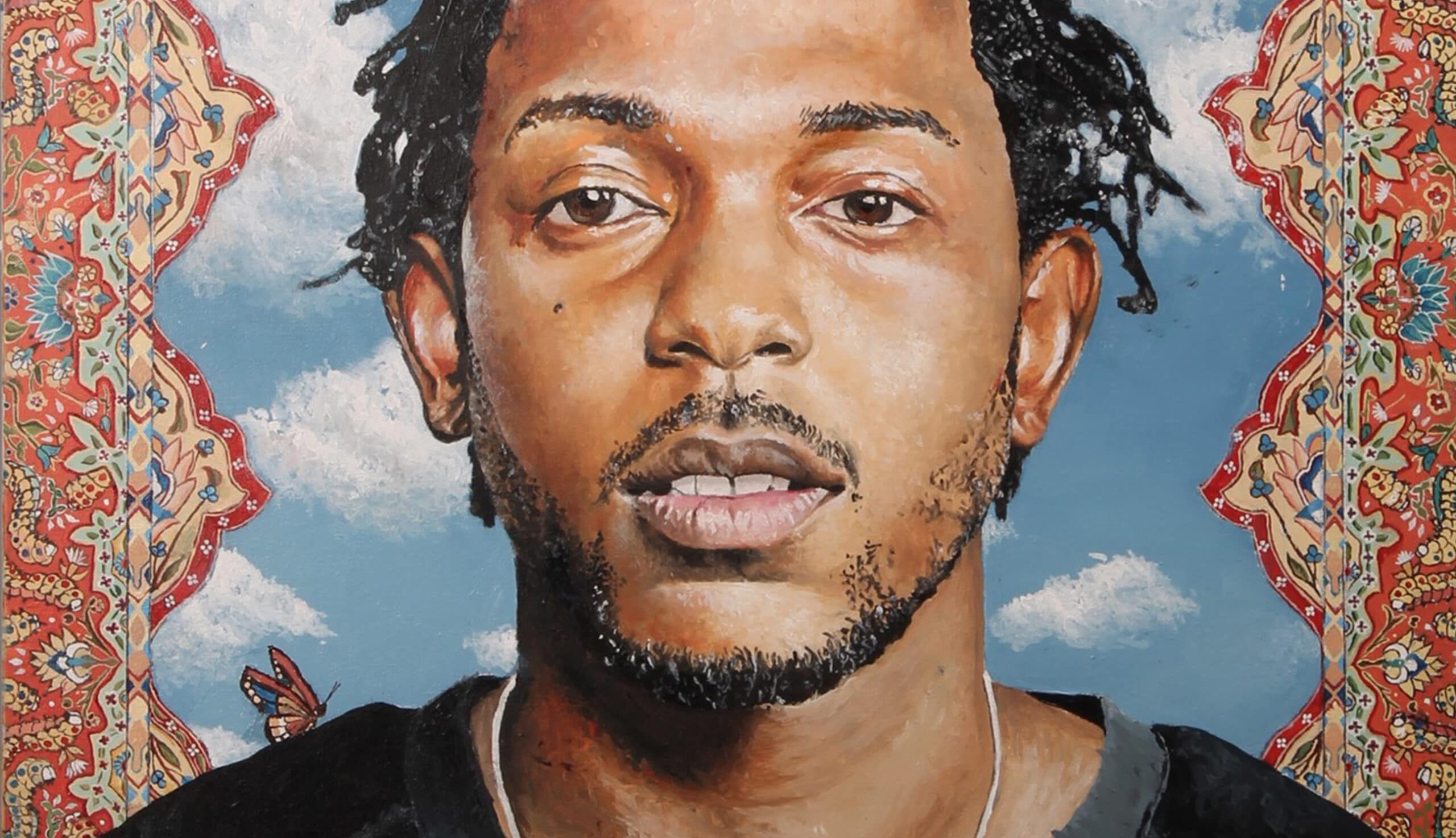 Tomi Olopade is a student of fine art currently based in Leeds. His art has been recognised by the likes of Maverick Sabre and Joey Bada$$ but some of his most enchanting and innovative work is yet to come. Tomi takes inspiration from painters such as Kehinde Wiley but also stays true to his own unique painting style. He has a prosperous future ahead of him so we asked him a few questions about his inspirations and advice for fellow creatives. Read the interview below.

Have you ever been to Nigeria? If so, have you taken any inspiration from anything you’ve seen over there?

I lived there for the first three years of my life but I’ve only been back there once since. I am definitely inspired by the culture; the music, the clothing, the food, the people. I definitely plan to return at some point in the future and base a painting project there.

Would you prefer people to see you as an artist or a black artist?

I feel that most creatives would prefer to be seen simply as artists without all the additional restricting labels attached. But regardless, we will be put into whatever box that society decides best fits us. Some people need to put things in a box in order to understand them. Whether I’m called an artist, a black artist or whatever else, I plan on making art however I want, about whatever I want. It’s best not to expect anything of me.

What led you to make the switch from architecture to painting?

I dropped out of architecture after my first year of studying; it really wasn’t a hard decision at all. The decision to study architecture was a logical choice based on my A levels but I knew on the very first day that it wasn’t for me. The hard thing was convincing my mum but eventually she got behind the idea. I did a year of a foundation course to help me decide between illustration and fine art. I settled on fine art because I didn’t enjoy drawing for other people or painting other people’s ideas.

Is pursuing a creative career worth the risk?

Of course if you go the normal route of an academic degree at university it’d be easier to get a ‘secure job’, but I know for a fact that wouldn’t bring me happiness at all. Before dropping out of architecture, I had a long phone call with my dad about how as a kid, he was obsessed with films and always wanted to enter the film industry. His parents pushed him towards a business career in which he was very successful but he never stopped regretting the missed opportunity of pursuing his dream. For me, I actually feel like I have a better chance of doing something great in art than in any other alternative. I’m under no illusion that it’ll be easy but I’m willing to struggle and work hard for it. It is possible to make a living but it’s not easy and there’s a lot of competition.

Talk us through your process of completing a piece of artwork.

The process of creating my paintings varies depending on the painting. For the current collection I’m doing, titled ‘Good Hair’, I don’t actually do many sketches at all. The process starts with taking the necessary reference photos into PhotoShop and playing around with how they look on different canvas proportions or experimenting with the colours. This particular series of paintings features portraits surrounded by intricately designed borders. The border patterns are sketched on a gridded pad before being scanned onto my computer where I can experiment with the colours using Illustrator and PhotoShop. From there, it’s pretty much straight to the painting. The painting process occurs in three stages; a drawing, a monochromatic underpainting and then the final oil painting in colour. The process is lengthy…

What’s the favourite piece of artwork that you’ve made so far?

The paintings that I’m working on now are my favourite to date. My painting skills have improved a lot since starting this collection; the concept is simple but the paintings are very intricate and detailed. They consist of the biggest and most intricate paintings that I’ve ever done. It’s a lot of work and it gets frustrating but it’s definitely proved to be the most satisfying when completed. Before that, it would probably be the Kendrick Lamar one that I did last year. That was the first painting in which I tried the mix of portraiture and patterned borders.

Who’s your favourite artist and why?

I have always been a fan of a wide range of artists from street artists like Kaws and Banksy to surrealists such as Salvador Dali. I also like contemporary artists such as Yinka Shonibare and Barbara Walker. I have a few favourites and my favourite is always changing. The one that stands out the most at the moment is probably Kehinde Wiley. I feel like I understood what Wiley was trying to do in his practice before even reading up on it. It was the first time that I’d seen paintings that not only were visually stunning, but I could also relate too. He is the main inspiration for my current practice.

Who’s your favourite hip-hop artist and why?

My favourite hip-hop artist is definitely Kendrick Lamar. I think he’s far ahead of the rest of the game today. Along with being an amazing lyricist with an incredible ear for beats and how to flow over them, Kendrick is an artist who experiments with his sound regardless of the waves that the rest of the industry is riding. On top of that, I think he’s proven that he can put albums together equally as well or better than anyone else; maybe even in the entire history of the hip-hop period.

If you could sketch any British emcee who would it be?

My favourite British emcee has always been Kano. Home Sweet Home was the album that got me to pay attention to the UK grime scene when I was younger. I’m trying not to focus on painting famous people for now but if I could do anyone’s album art, he’d be one of the people I’d love to work with.

In your last interview you mentioned that “we are all incredibly individual and also all the same”. What did you mean by this?

In context, I was saying that I wanted to make art that challenges the stereotypes and assumptions people make of cultures they don’t understand. “We are all incredibly individual and also all the same” was a way of saying that we should embrace our differences in order to understand each other and realise that we aren’t all as different as we sometimes think. We’re all individuals but we’re all still human with the same basic needs and desires, just with different perspectives leading to different ways of dealing with life. I know that’s a vague explanation of a vague comment but I think that’s the best way I can explain.

Is there something inexplicable that unifies black males with one another?

I’d say yeah there is, in a sense. However I wouldn’t narrow it down to just men; I’d say all black people. I think it comes down to a shared history of struggle and oppression and shared experiences in life. Although it would be naive to say that all black people accept one another and there is no separation among us, the culture, art forms, struggles and accomplishments experienced across the pan-African diaspora resonate with us all.

What other art forms inspire your art?

I am very inspired by both music and film. I see them as literally another way of painting a picture but with sound or moving image as opposed to paint. There is definitely just as much in music or film that can inspire my art as there is in paintings.

What films have you been most inspired by?

I haven’t yet delved into filmmaking but in my paintings, a lot of films have inspired me especially when it comes to things like colours, concepts or composition. ‘Daughters of the Dust’ is an example. The set design and cinematography of ‘La La Land’ or the movies of Wes Anderson are other examples of films that have inspired me. As far as the actual practice of filmmaking goes, directors such as Paul Thomas Anderson, Alejandro Iñárritu, Martin Scorsese, Antoine Fuqua, Barry Jenkins and Quentin Tarantino are some of the top people I could see myself borrowing from stylistically.

Which city do you prefer London or Leeds?

I have loved my time in Leeds, however I’ve missed London a lot. I don’t think anywhere compares to it. There is just so much going on in London all the time and so much to do and be inspired by. Leeds is a lot smaller and less busy so it’s easier to get around and a lot cheaper to live in. London’s size probably counts as both a positive and a negative but I’m definitely more of a big city person. Its cost of living is actually the only considerable negative for me.

Lastly what’s your best piece of advice for young black males trying to break into the creative industries?

I’m still in the early stages of attempting to break into the industry myself. But my advice is: be yourself, make art from your own perspective, take from all those that inspire you but mould what you take into your own vision, be ambitious and don’t give up. There are no rules to making art so just do what you want to do, not what you think you’re supposed to or what is ‘expected of you.’