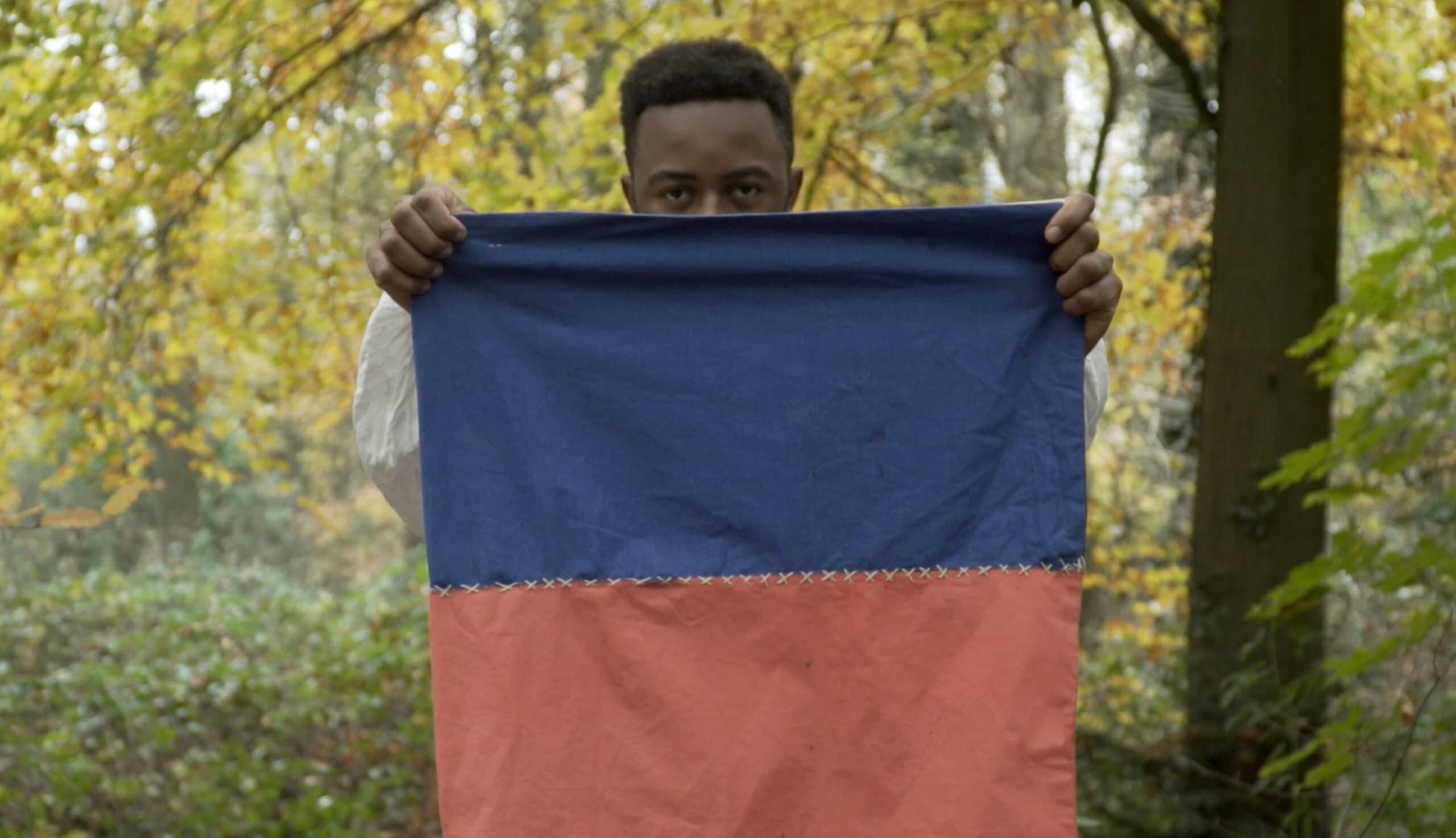 Ghost of Haiti takes place in a purgatory France. A freed Haitian slave tears out the white tricolour from the French flag (representing the white slave-owners), and stitches the red and blue back together to form the Haitian flag. This is the true origin of the Haitian flag. Catherine Flon famously sewed together the first national flag of Haiti in 1803 and my film takes inspiration from this. I made the film in attempt to raise awareness to one of the most fascinating revolutions in human history. Today, Haiti is known as the place where the catastrophic earthquake happened. In 1804, it was known as the home of the most dangerous men and women in the world; rebellious Africans.

Haiti shares an island with the Dominican Republic. The name of the island is Hispaniola and both nations are divided down the middle by its mountainous terrain. In 1492, Hispaniola was the first site in the Americas that Christopher Columbus settled on, hence why the island is named in honour of his Spanish sponsors. Moreover, centuries before the inception of the Haitian revolution, European violence plagued the island. Columbus, a man who is widely celebrated today as a benevolent explorer, systematically terrorised and enslaved the indigenous Taíno people of Hispaniola. The extremity of the genocidal violence committed by the Spanish across the Americas is overwhelming, but the deadliest weapon Europeans brought to the Americas was disease. The Taíno inhabitants of Hispaniola, estimated to be a population near a million in 1492, had all but vanished by the mid-1500s.

The reason it is important to acknowledge this when speaking about the Haitian revolution is because the Haitians were not ignorant to the violent history of the island – and perhaps the haunting nature of the previous European genocide acted as further incentive for African slaves to rebel. Many eerie remnants and utensils of the Taíno people remained on the island as Laurent Dubois outlines in his prestigious book, Avengers of the New World: “On one sugar plantation, each hole dug for the cane turned up some new vestiges of the existence of this race now erased from the list of humans”. Upon the creation of the independent state of Haiti in 1804, the Haitians honoured the Taíno name for the island. The name that the Taíno had given the island was ‘Ayiti’, thus the name ‘Haiti’ was at least in part a tribute to the island’s original inhabitants.

The Haitian revolution erupted in 1791. At this time, Haiti was France’s wealthiest colony and went by the name of San Domingue. San Domingue’s vast wealth came from the sheer amount of sugar it produced. As the nonchalant folk in England, France and other European nations became addicted to caffeine rushes provided by tea and coffee, they soon realised that the rush was particularly improved by a few tea spoons of sugar. Sugar production was a key driving force of the European economy, hence why famous historian, Niall Ferguson, often muses that the British empire was built on our sweet tooth. Nonetheless, by 1791, French San Domingue easily out-performed British Jamaica’s sugar production and held complete domination over the market.

Alas, the success of San Domingue’s sugar production came at a harrowing cost; the blood, sweat and tears of African slaves. Initial attempts to enslave the Taíno had fallen short once they began to die of disease and fatigue. A priest who had accompanied Columbus on his voyage to the New World found the brutality against the Taíno so disgraceful that he suggested using Africans instead. This irony reflects how African life was valued at the time. Amidst the hierarchy of ‘race’, Africans were at the very bottom, thus perfect to be used as slaves for the cultivation of sugarcane.

Chattel slavery was happening all over the Americas so why was there only one successful slave rebellion? First of all, there have been slave uprisings in almost every slave colony to ever exist. Slaves in British Jamaica were particularly rebellious but the British managed to crush them almost every time. When the British failed to crush the spirits of rebellious slaves, they made deals with runaways and allowed them to live in the mountains – look up ‘Nanny of the Maroons’ to learn more.

Furthermore, it is no coincidence that two years after the inception of the French revolution in 1789, the first uprising of the Haitian revolution began. When word of a domestic rebellion against the king of France in the name of liberty and the rights of man reached the ears of disgruntled slaves in San Domingue, it sparked a renewed thirst for freedom amongst the displaced Africans. Albeit, the French revolution was not the sole reason the slaves rebelled in San Domingue. San Domingue only produced such enormous wealth because of the absolute brutality of its slave society. There are instances of slave-owners humiliating their slaves in the most unspeakable ways in French San Domingue. In some cases, troublesome slaves were buried alive with their heads above ground and smeared in sugarcane residue. This would invite insects to devour their flesh. As the following years proved, this brutality would not go unanswered. On the eve of the Haitian revolution, 90% of San Domingue’s population were slaves.

“White Europeans were not the only victims of the revolution. Thousands of African insurgents were slaughtered, and too often by fellow Africans in unfortunate civil conflicts.”

Due to tropical diseases and the brutality of slave society, hundreds of graveyards littered San Domingue by 1791 and the paranormal theme in my Ghost of Haiti film is inspired by the unnerving backdrop to the revolution’s first uprising. There are records of several slaves gathering together in secret to perform eerie blood-letting rituals in preparation for the first battle. Haitian heroes, Cecile Fatima and Dutty Boukman were among these slaves. Moreover, it was almost a month before the eventual leader of the Haitian revolution, Toussaint Louverture, appeared in the fold. A man older than fifty and living in more comfort than most field slaves took the incentive to organise the rebellion. For years he engaged in political trickery that surprisingly entailed fighting as a military general for Spain at one point. Toussaint played the French, Spanish and English against each other like the island was his chessboard. However, the man was not without his flaws. White Europeans were not the only victims of the revolution. Thousands of African insurgents were slaughtered, and too often by fellow Africans in unfortunate civil conflicts. There were instances where the division between Africans and lighter-skinned people of colour (who had been afforded more privileges due to their European heritage) caused civil war. The lines were very blurred in this period and racial categories were almost more complex than they are in Western society today.

Nevertheless, the greatest enemy of the Haitians were undoubtedly the French. The threat that the Haitian revolution posed to France was so extreme that the First Consul of France at the time, Napolean Bonapart, sent a huge armada to try and suppress the rebellion. In spite of this, after years of conflict, disease got the best of the French troops and the Haitians bravely held off their far more advanced military opposition. In 1804, Toussaint’s right-hand man, Jean-Jacques Dessalines, declared Haiti the world’s first black republic. Upon this triumph, Polish soldiers who had refused the orders of the French to brutally execute slave insurgents were also accepted as part of the new black republic. What better way to mock the insidious construction of race than to accept Polish soldiers as ‘black’ brothers? Dessalines referred to them as “the White Negroes of Europe”. The revolution was far more complex than a group of rebellious African slaves killing white slave-owners. One of Toussaint’s closest advisors during the revolution had been white.

The brutality inflicted in the revolution on either side is nothing to uphold as dear, but respect must be paid to those who gave their lives for the principles of freedom and humanity that were stripped away from African slaves at the time. How could France be preaching liberty and the rights of man while possessing slave colonies? The Haitian revolution should be one of the most famous stories in human history but for reasons beyond me, it is not. England banned the slave-trade in 1807; three years after Haitian independence. Are we really to believe that the Haitians didn’t influence this decision? Thousands of British soldiers died trying to claim Haiti for themselves during the turmoil. This history is not black history. It is human history. If we all took a brief look into the past every now and again, we might better understand the socio-political situations of today. ‘Avengers of the New World’ by Laurent Dubois and ‘Black Jacobins’ by CLR James are great introductory reading to Haiti’s fascinating revolution.