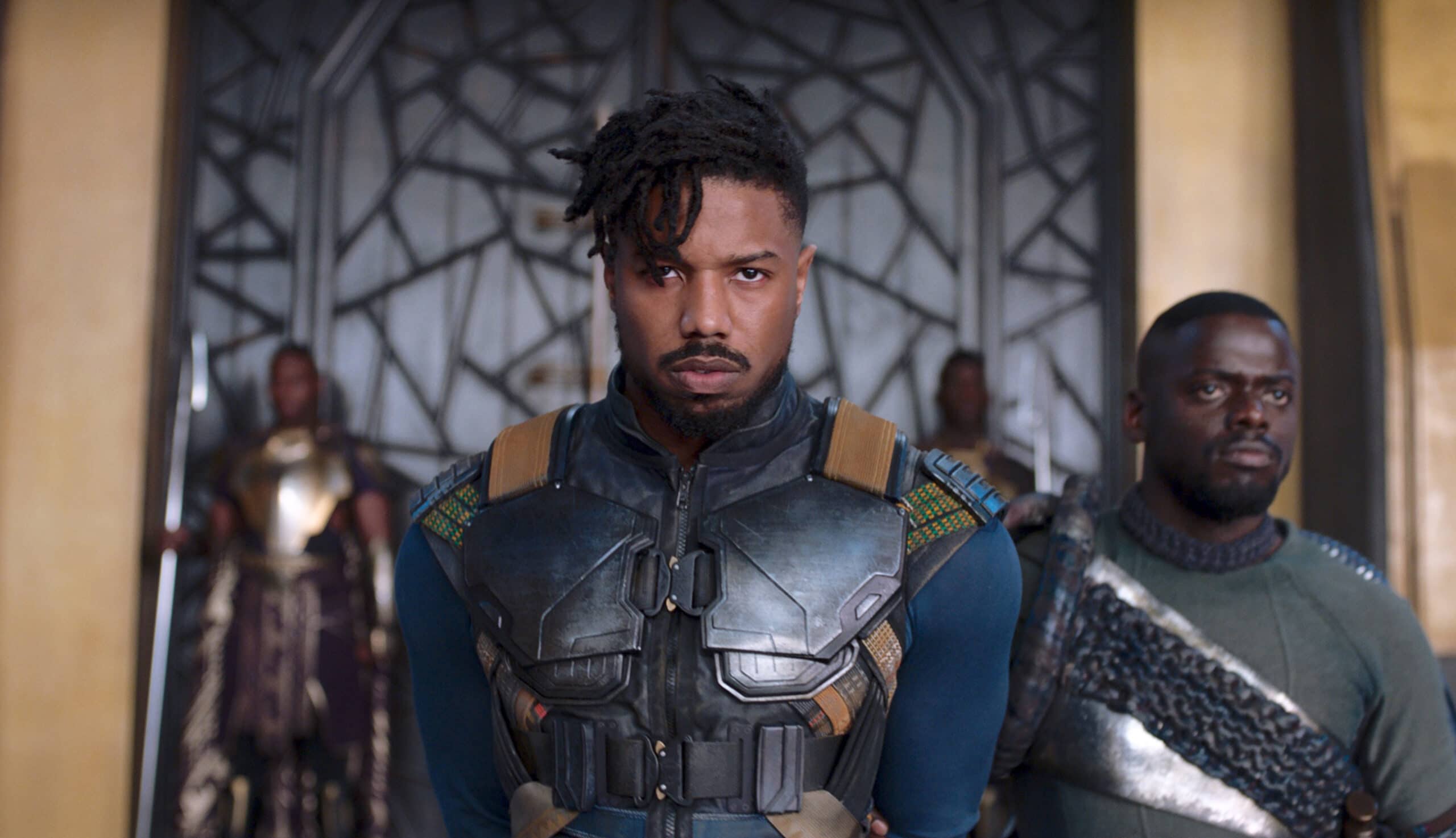 Marvel’s latest blockbuster, Black Panther, seems to have struck a few nerves this year. It is iconic, provocative and a timely progression from last year’s #BlackLivesMatter campaign. What stands out for me in this film is that we see a battle between nobility and black aggression.

The majority of the film is spent constructing two sides. Early on, the audience sees T’Challa prove his worth in a trial and combat event before a collection of noble tribes. In seeing him win, we are made to acknowledge that he is a king deserving of the crown. The opposing depiction of the antagonist, Erik Killmonger, requires more in depth screen time, flashbacks, and prolonged story-telling. Eventually it is revealed to the audience that Killmonger, who was left orphaned due to his father’s murder by the previous Black Panther, has grown up in America to witness pervasive racism taking the form of police brutality and mass incarceration. He has also learnt about the impenetrable walls of Wakanda and their technology so far advanced that it holds potential to globally liberate all black people. Furthermore, this is Erik’s precise intention – to liberate black people across the globe.

“It is in this way that global black liberation is opposed to nobility and tradition. To liberate is to reveal and to reveal is to break tradition.”

Yet, this objective flies in the face of Wakandan tradition. As a nation, Wakanda does not engage in international trade and they do not accept aid. In fact, they are so isolated from the rest of the world that their nation is shrouded by a cloaking device. It is in this way that global black liberation is opposed to nobility and tradition. To liberate is to reveal and to reveal is to break tradition. We are taught early on that this decision to remain detached from the rest of the world was a pragmatic reaction to the colonisation of neighbouring nations. Moreover, the audience is given a visualisation of what Danai Gurira describes as “paying respect to our past and honouring it, while offering the future at the same time…the uncolonised Africa”.

In later scenes, Killmonger’s return to Wakanda results in T’Challa’s defeat and the genesis of an initiative to globally export Wakanda’s special weapons. This is a pivotal moment for the character development of Killmonger. We see that he is not simply satisfied by obtaining the throne but is also driven by the goal of liberating Africans across the world. At this point, the character of Killmonger aligns his personality with “a collective African nationality”; an interesting modern phenomenon cited in Modern African Ideologies by Joy Hendricson & Hoda Zaki. Yet, as leader, Killmonger is dogmatic – killing anyone who stands in his way, burning the forest in which the Black Panther ability elixir grows and launching those who question him half way across the room. In this instance, he comes across as a thug in power, driven by a vengeance adorned as emancipatory philosophy. He becomes a trope for inner-city gangsterism.

The final battle ends with T’Challa defeating Killmonger. Though T’Challa offers to spare the life of Killmonger, it is rebuffed as Killmonger poetically declares, “bury me in the ocean with my ancestors that jumped from the ships because they knew death was better than bondage”. Because of this, Brooke Obie defines Killmonger as an avatar for festering Black American pain. Throughout the movie the two world views are made so distinct that Killmonger’s death can be interpreted as a symbolic death of global black liberation, while T’Challa’s victory represents a triumph of nobility and democracy.

I would like to offer a unique addition to this interpretation and an extension of Adam Serwer’s claim that Black Panther “is first and foremost an African–American love letter.” In the closing scenes, T’Challa reveals his nation to the world. At a local level, he reveals Wakandan technology to residents of Oakland, while on the international stage we see him standing before a collection of world leaders offering a helping hand to the UN. In this way, the audience is directed to a pro-democratic world view. Wakanda, a nation ubiquitous in resources and technologically so far advanced that it could: 1) dominate the entire world; 2) unleash an army of vigilantes so well disguised that the world would never know; 3) leave the world to find a better planet to occupy – chooses the political route. The message being that Wakanda stands for democracy because it works. At its core, democracy stands for the rights and dignity of each individual from birth, thus T’Challa’s alignment with democracy and Western values supports a notion of inalienable human rights.

Due to the way the film depicts two clear and distinct world views, I understand why it could appear as though Killmonger’s death parallels the death of global black liberation. However, my point is that the perceived dichotomy eluded to by Leslie Lee III’s tweet is somewhat false in light of the greater dichotomy evident in the film between Wakandan tradition and Western values. Throughout the movie, T’Challa is conflicted between following a legacy left by his father; remaining detached from the world – or changing to become subjugated to global politics. Wakandans are tribal insofar as they determine leadership by combat, yet an adherence to democracy would result in more international aid, trade, and strategic multilateral relations.

“T’Challa’s support of Western values implicitly supports the rights of ethnic minorities, though not in the same dogmatic fashion as his villainous counterpart.”

In Black Panther (2018), the audience is confronted with a final dichotomy that reads: democracy or tyranny? In this way, T’Challa’s victory should not necessarily be seen as the death of global black liberation. In the real world of democratic order, many of the educated African diaspora have merged the notion of equal rights for ethnic minorities into the Western-born concept of individual human rights. In this sense, T’Challa’s support of Western values implicitly supports the rights of ethnic minorities, though not in the same dogmatic fashion as his villainous counterpart. Hence, not only does T’Challa support the liberation of Africans around the world, he also supports the liberation of all humans. His appearance at the UN would suggest that he believes in protecting the rights of each individual – which of course includes black people. In contrast to this, Killmonger’s anger towards colonisation reveals his version of black emancipation to be a threat to anyone who is not African. In liberating all Africans across the world, he excludes those in equal need of help who are not African. This exclusivity is opposed to inclusive democracy, hence why T’Challa opts for the latter.

The claim that this film is pro-democracy should come as no surprise, particularly if we look at the social context of the film itself. Black Panther (2018) promotes freedom of the individual by the very fact that it has a higher representation of traditionally underrepresented social groups in its cast. Not only does the film meet numerically high standards of black female representation, but it also meets qualitatively high standards insofar as these females take on important roles in the movie and are not limited to subjects of the erotic gaze. Furthermore, the film is written and directed by Ryan Coogler and Joe Robert Cole, two filmmakers that are known for producing thought-provoking content such as Fruitvale Station (a biography of a police shooting incident in California) and American Crime Story: The People vs OJ Simpson.

“Is a film enjoyable simply because it is more representative?”

I have seen the film twice in different settings; the first in a majority black audience and the second in a more diverse environment. In doing so, you clearly notice the influence a more representative film has on historically underrepresented social groups. For example, in the majority black audience there was more affinity with some of the humour. As Shuri is shocked by Everett Ross’ awaking, her consequent playful reproach, “don’t scare me like that, coloniser!” is followed by a roar of laughter from the audience. Nonetheless, a more diverse audience still had moments of affinity, i.e. when Nakia and T’Challa’s lips touch for the final kiss, a series of emphatic awwwws resonates across the room. To my surprise, the second watch wasn’t quite as emotionally contagious. This leads us to my final question. Is a film enjoyable simply because it is more representative? In short, yes. An audience wants to build a bond with the protagonist and a distaste for the characteristics of a villain. This is more achievable when the audience can see a part of themselves in the characters.

In conclusion, I enjoyed the film more the first time round than the second. It was impactful and had more ‘oomph’, while the second viewing left me bored and irritated – though that was likely the result of having watched it already… or the fact that as a superhero film, it inevitably has a predictable plot. Moreover, the key message I would like to leave the reader with is one that challenges the claim that Black Panther (2018) punishes any notion of global black liberation. I can see how this could have been interpreted from the film, but in truth, I feel it to be a misnomer. If anything, the film introduces the audience to a new notion of global black liberation – liberation for all, not simply for the African.