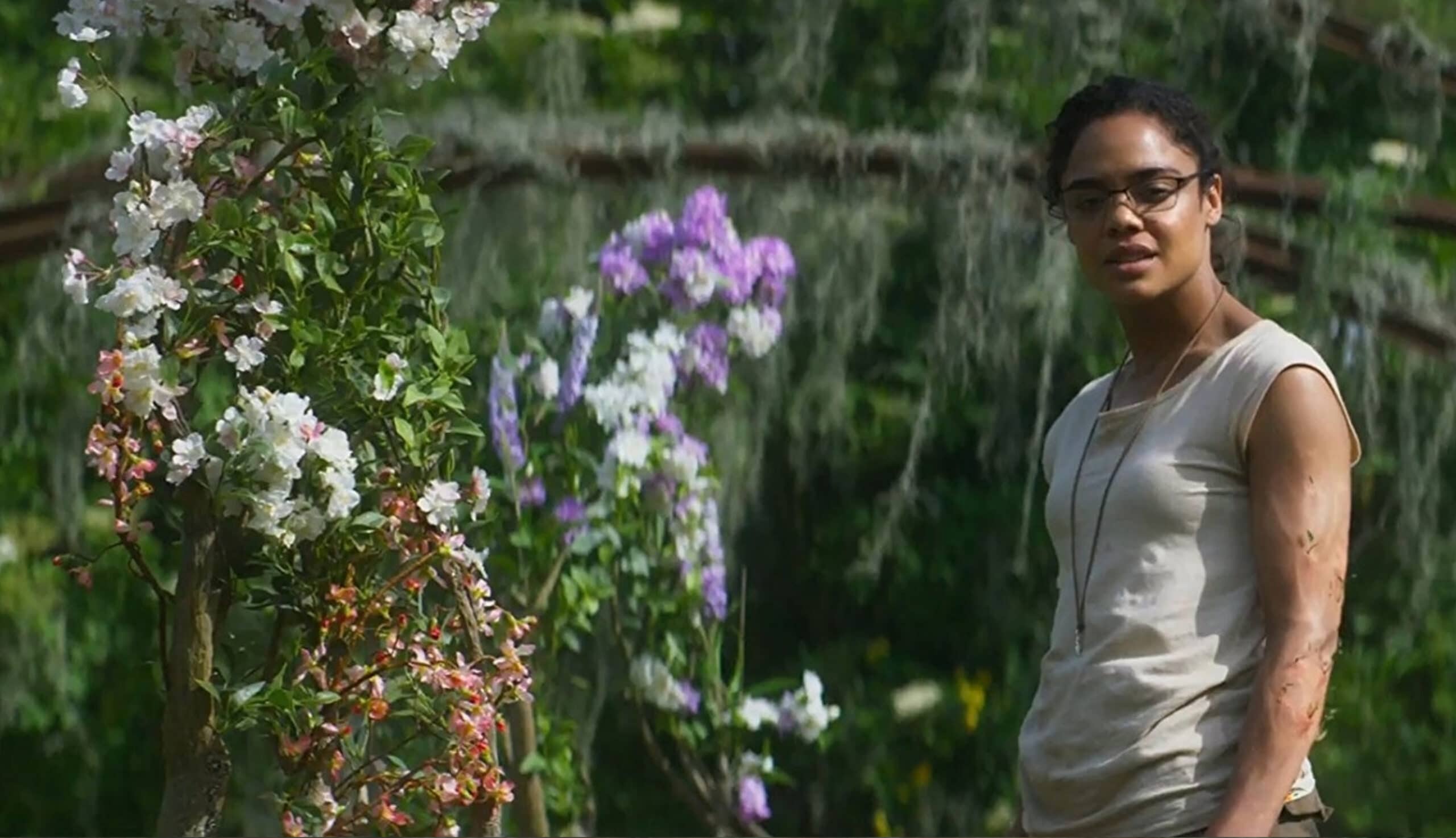 Annihilation: A Lesson in Cinematography

Alex Garland’s visually gratifying Annihilation (2018) depicts a time in the future when humanity is threatened by an extra-terrestrial threat. The film is a successful adaptation of the first book of Jeff VanderMeer’s Southern Reach trilogy. In print, Annihilation presents an unnamed biologist’s field journal whose wild descriptions, hallucinations, trauma and paranoia invite readers to questions the protagonist’s sanity. Garland’s script seizes on key ideas from the novel to portray a narrative leading spectators to unexpected plot twists and exciting events. The film is led by five strong female characters and questions the representation of women in science and the military. In summary, the film is a brilliant science-fiction espionage of five brave women on a journey to save the human race from an extra-terrestrial threat.

The opening sequence of the film is set in a scientific isolation chamber. Our protagonist, Lena, is seated fixed on a chair being interviewed by an officer in a hazmat suit. Whether this is the beginning of her story or not, we aren’t entirely sure. Garland effectively creates a ‘scientific-like detective’ question room allowing us to perceive Lena as a ‘guilty outsider’. As medical doctors stare at Lena from a distance outside of the room, the group of officers in the room ask Lena basic questions and receive vague answers. The mise-en-scene of this scene helps creates this ‘scientific-like detective’ mood. Just before the scene begins, we hear a flicker of light and suspenseful music which work together to create a tense atmosphere. We see Lena positioned in the centre of the chamber next to a glass of water and a bin – both props symbolising dehydration and illness (symptoms of insanity). Later in this sequence, we see a back-view shot of Lena seated on the same chair and she seems to be at a distance from the three officers; this implies Lena is seen as a dangerous subject. The design of the chamber as a box-like mental asylum and the colour code of white creates a tabula-rasa theme. This could perhaps suggest Lena’s ‘blank slate’ mind as she is unable to answer or remember basic questions such as who the last person she saw was or what she has eaten.

Garland’s execution of the mise-en-scene in the first sequence is a direct connection to Robert Weine’s The Cabinet of Dr. Caligari (1920). Not only does Garland adopt a similar flashback technique which works as a catalyst to drive the narrative, but he also recreates his own version of the mental asylum. In the beginning of the film, I was certain Lena was delusional but towards the end of the film, my opinion changed and that is great storytelling; the trick of perception.

Another film that Garland makes a connection to is Georges Melies’ A Trip to The Moon (1902). The following sequence of a meteor approaching planet earth and striking a coastline of the United States is similar to Melies’ film in terms of the cinematographic perspective. Usually a meteor traveling to earth brushes past the camera or is depicted at a distance, however, in Annihilation, the camera is placed behind the meteor and travels with the object. This is similar to Melies’ picture when we are presented with the scientist’s perspective of the moon as the characters travel closer to it. This technique aligns the audience with a scientist’s perspective – which is very relevant to Annihilation.

“The exceptional execution of cinematography is similar to Alejandro G. Inarritu’s The Revenant”

In the scene where we see Dr. Ventress and her team awaken in the morning after they settled in the wilderness, Lena wakes up and admits feeling disoriented. This is depicted visually by the cinematography; the moment Lena wakes up, the background and middle ground is in deep-focus and portrays a very green environment. As Lena observes her surroundings and wanders around the assured eco-friendly area, the camera is mobile, fluid and observant as it mirrors her every movement. The camera pans subtly after every body movement, allowing the audience to experience what she sees and feels. In addition to this, the camera mimics her walking pattern before she enters the frame in a tracking shot. The exceptional execution of cinematography is similar to Alejandro G. Inarritu’s The Revenant (2015). In Annihilation’s most suspenseful scenes in the outdoor environments, the force of the cinematic language shone through the nuanced camera movements.

Similar to the bear scene in The Revenant, a bear-like creature makes a violent appearance in Garland’s film. Anya, the toughest of the crew, expresses paranoia and confusion as she starts to experience the effects of the alien ‘atmosphere’. In her distress, Anya ties up her fellow crew members and puts tape over their mouths. After being knocked unconscious by the terrifying bear-like creature, it enters the room in which the crew are tied up and creates an incredibly tense scene. The feeling of this scene reminded me of how DiCaprio’s character in The Revenant fought bravely to kill the bear before it had a chance to take his life. Likewise, Anya fights with all that she has in attempt to defeat the bear-like creature.

The film takes an unusual psychedelic turn towards the end when Lena enters the lighthouse; the exact area where the alien meteor struck. It is this point when we see the alien who is not only more powerful than assumed, but also has an unusual supernatural skill of ‘mirroring’. Garland creates a tall, strong alien with animal-like features similar to Weine’s depiction of the somnambulist in The Cabinet of Dr. Caligari. The soundtrack and interior space of the lighthouse create another memorable scene, but it also raises an important question of who the alien is supposed to represent – since Weine’s somnambulist supposedly represented a prophecy of a German war government; a symbol of the rise of Adolf Hitler and the Nazi party.

Even though it was released on Netflix and not in international theatres, the direction of the acting and the choice of the casting pushed Annihilation to reach commercial success. There were great performances from all of the leading roles in the film but the most memorable scene in my opinion was ‘Kane’s return’. Lena, played by Natalie Portman, displays a deep and intimate affection for the husband she thought she’d lost (Oscar Isaac) when he returns from ‘The Shimmer’. Lena’s actions signify a lovesick persona and only someone as talented as Portman could pull off such painful emotion. Above all, this is a masterpiece that references three of the greatest films of all time and reviews the visual literacy of Expressionism. The choice of story, narration, casting and references to early 20th century cinema mark Annihilation as a motion arts picture that could last through the ages.